Glad to be back in the world of flash fiction with my favorite weekly writing prompt over at Flash Fiction for Aspiring Writers.  Hope you guys enjoy this one!

“We’re losing elevation, Tom.”
“I know Ben.”
“There are cars in those streets, Tom.”
“I know Ben.”
Tom had never flown a chopper before. He still wasn’t sure how Ben had talked him into being the one to do it. Ben was always setting him up. They had been planning the heist all summer. Weeks, even months of effort would be wasted because Tom couldn’t maintain altitude. Assuming they weren’t killed. Even if they somehow survived, the consequences would without question last the rest of their lives. There’d be no leniency.
“Tom, you’re going to crash!”
Tom panicked. He pushed down hard on the stick and the chopper lurched violently towards the ground. Too late he remembered he should have pulled back.
“Oh no oh no.”
There was a terrible grunt as the thing hit the asphalt. Cars shrieked as their drivers slammed on brakes and horns alike in a futile effort to avoid this sudden invader to their streets. Time stopped for Tom as his world crashed down. In that frozen moment, a single car dodging the pileup managed to break through and run right into Tom’s chopper.
And crushed it.
It was Dad’s favorite.
Dad was going to be pissed.

I couldn’t resist this photo-prompt from Flash Fiction for the Aspiring Writer.  Hope you enjoy it!  Thanks to TJ Paris!

Donald took a deep breath. This would be the biggest moment of his life, a life which until today had been sentenced to menial chores around the farm. Well, he wouldn’t stand for it any more. Let somebody else carry grain to the mill! He was already nine, and life was passing him by. Well, no more.

He’d need to prepare. He grabbed his lance, an old post that he’d spent most of last summer filing the end down to a point. He strapped on his armor, the pots and pans that he had scavenged from Mom’s kitchen. The family dog watched him at this with some interest, thumping his tail dutifully on the floor.

Don leaned down and pet the dog, who got up to follow him as he strode from the house.

Today, he escaped monotony! Today, he freed himself of the giants that loomed over him.
Today, he’d be tilting.

Here’s today’s Flash Fiction for the Aspiring Writer.  For some reason, the focus and color made me think Disney.  A little long this week!

Thanks to pixabay for the picture.

The outside of the apartment was like nature’s circus, a beautiful assortment of colored plants. If only it didn’t have to snow!
The young man fiddled with the door for several minutes, large droopy eyes giving him an almost childlike visage. Didn’t work. He gave the door a feeble kick. Nothing ever worked. And suddenly, his friend was there, the nice lady with the pale skin and dark black hair.
“Come on, you old dope. Don’t let the grumpies get you,” she sang before nimbly stepping over to help him. She eased the key from his hands and helped with the lock.
He smiled up to her. She leaned in as the lock clicked. “See! Be happy.”
He just kept up with his simple smile.
“Not talking… Feeling bashful?”
He wasn’t really sure what bashful meant, but nodded at her. He liked to see her smile at him. The snow had begun to land on her, each flake adding a sparkle to her sapphire blouse. A flake landed on his nose, making him sneeze.
She shepherded him into the apartment, the only light of that cave coming from the brightness outside. “Now go wash up for dinner.  The Doc says you need to get some sleep, and I’d like for us to eat first.”
He shuffled off, trying to do as she asked. Moments later, he heard a voice at the door. It was an old woman, looking almost one with the falling snow, withered skin and a pointed nose like a wilting gray carrot. The young man disliked her immediately.
“Would you like to buy some fruit, my dear?”

Here’s my entry for this week’s Flash Fiction for the Aspiring Writer.  Enjoy. 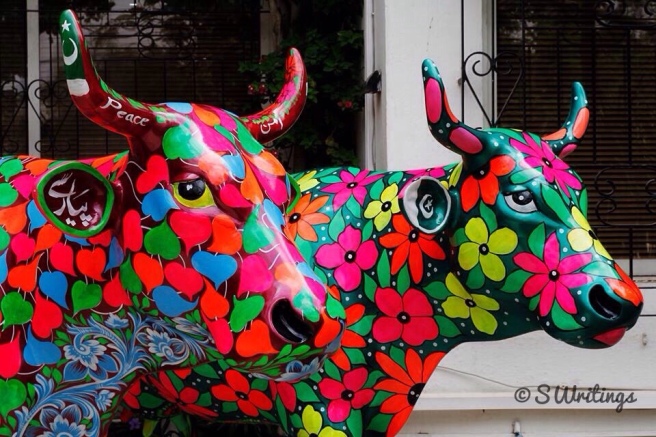 Thanks to S Writings for the prompt.

“Are you sure we’re in the right place?” That may have been the four hundredth time Mary Lou had asked the question.
Barbara Ann looked hard at her, that glazed look she had crafted so well after so many years. “Of course we are.”
It wasn’t a part of town they were used to going to. Things were just… weirder out here. So many bizarre objects and people all around. The big city really was nothing like the farm. Mary Lou had never seen anything like it. They ambled down the street together, trying to take it all in. It just felt… wrong.
“You’re sure?”
Barbara stopped in her tracks. “I’ve told you so many times. And of course the people are staring. We may not be from around here, but I know we’re in the right spot. How many multi-colored cows do you think are out wandering the streets?” Barbara resumed her glassy eyed stare.
Mary Lou stopped chewing and paused. “That’s what I mean. We can’t be the only ones, right?”

This week’s flash fiction for Aspiring Writers is dedicated to Juliette – a 6 year old black lab we lost last week to kidney disease far too young.

Here’s the prompt and story.  Thanks to Pixabay for the prompt.

Maddox was going to die in this damned building. High pitched shrieks from inside made him step in to investigate. Sounded like kids. He took the stairs down and the whole thing collapsed on him. Now he was trapped in that cellar with no way out, and no one to hear his yells. He wasn’t sure how long it would be before the rest of the squad found him, or even if his air would last that long.

He had already been here for two hours, and all for a damn dog. The shriek he had heard came from some poor mutt that had scurried inside to get away from the hell just outside. Once everything fell, he had been able to push the dog out a hole at the top of the stairs. The act of shifting debris around to get the pup out had collapsed everything even more. And now he was stuck.

Sound above drew Maddox’s attention. He looked up and saw shifting dust and sand falling around him. Somebody was moving the rubble above him.

Light peeked through, blinding him after the hours in the dark.  Dugan’s face crowded out the light.

Maddox wanted to cheer.  “I have never been happier to see your face, man. You’re a real friend for coming back. How’d you find me?”

Dugan’s face creased with a smile.  “We wouldn’ta been able to weren’t for your other friend. Man’s best friend.”

Another face pushed Dugan’s aside… A hairy panting face.

Juliette, you will always be remembered and loved.  Whether it was being there when my wife was sick, to cleaning up the dinner our kids threw on the floor, to the voice we created for you, and how you recognized when we used it… you were truly man’s best friend.  You’ll be missed.

This week’s Flash Fiction for the Aspiring Writer.  Hope you enjoy it. 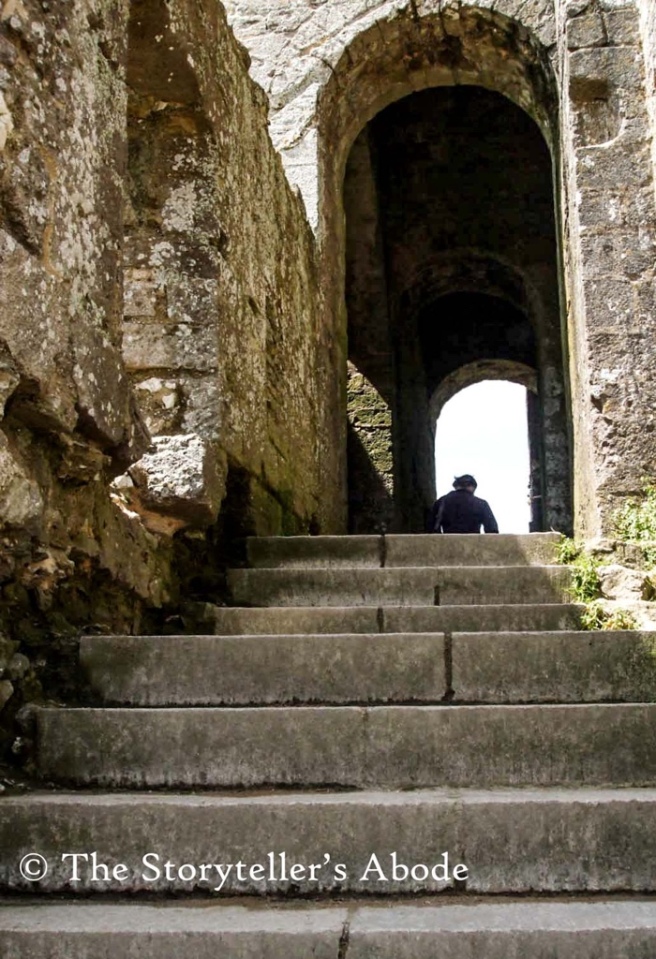 Thanks for the image, Storyteller’s Abode!

Dawn sat on the grass, her back against the crumbling stone wall outside the Richmond building. Her classes were all over in Hawthorne, but this was still her favorite spot to study. Her coursework was spread in an arc around her, lily petals waiting to be plucked as she finished each course.

This area was always abandoned except a few graduate students who only came to campus to turn in papers. Hawthorne was in the new development built in the 80’s… Richmond was antique. An original structure from back the University was established in 1840. Back when “University” still meant something and institutions built up like castles all over New England.

“Grant, thanks for coming.” The voice came from the other side of the wall, on the old stone stairs leading into the hooded corridor. She stopped writing.

“Don’t use my name. How many more are left on the list?”

There was a hesitation and the hiss of fumbling papers before the first voice spoke again. 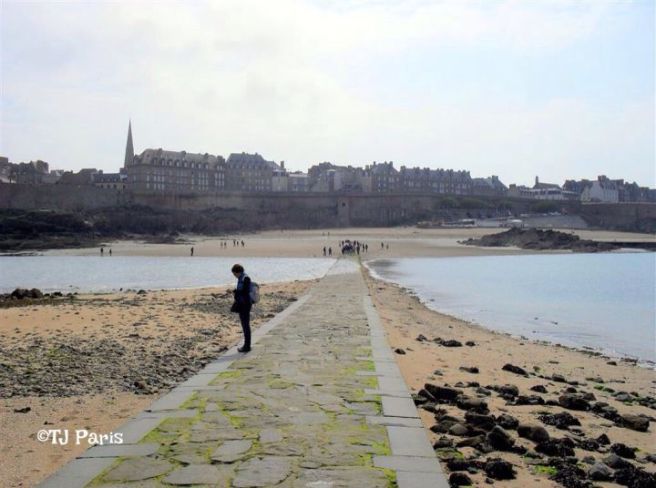 Lakeshore was little more than a few buildings overlooking twin ponds that merged over the path during heavy rains. To Trant, it was prison for people that didn’t measure up.

To the public, it was so much more. It was a prestigious boarding school that turned boys into men. That’s what his parents said when they exiled him here, and that’s certainly what the Board of Trustees said, those fat old men sitting in their cheap tweed suits smoking expensive cigars and clapping each other on the back. They had succeeded on all fronts. Scholastics. Debate. Drama.

And Track. Crown Jewel of Lakeshore.

The only thing that Trant excelled at. He was a runner.

Sirens cut the quiet muddy afternoon, waking the sleepy town on the hill surrounding Lakeshore.  How presumptuous. They thought a few whirring cries would actually motivate anybody to get up this early and join a search.

No matter. He shouldered his pack and began to hurry away.

They were what they were. And he was what he was.

Start Your Fiction
Blog at WordPress.com.